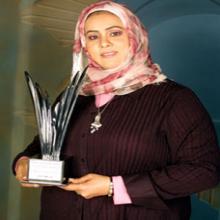 Fifteen years ago, Huda Janahi started her business, Global Cargo and Traveller Services, with start-up capital of 1,000 Bahraini Dinars (around US$2,600 at today’s exchange rate). She ran the business single-handedly from an office in a small rented space in Muharraq, Bahrain's third largest city.
For the first year, all progress was blocked because her application for a commercial registration was rejected by the Ministry of Commerce. She was told that women could not receive a commercial registration to operate in the cargo industry. Undaunted, Janahi refused to accept no for an answer and she joined the UNIDO AICEI Enterprise Development & Investment Promotion program in Bahrain. In 2001, after graduating from the UNIDO entrepreneurship development programme, she applied again for registration and, with UNIDO’s support, her application was finally accepted.

Within a few years, Janahi built up her company into a huge successful enterprise and, in 2008, she signed a merger worth US$3m with the Kuwaiti cargo company, Global Logistic Company, which serves the whole Middle East region. Currently she owns 8 businesses in services, retail, media and manufacturing employing 85 staff and her net worth is estimated at $25 million USD.

Today, Janahi is an award-winning businesswoman, one of the most influential women in the Arab world according to Forbes magazine, and is hailed as a role model for budding female entrepreneurs across the Persian Gulf region.

Mrs. Janahi, has received numerous awards and recognitions; namely;
• In April 2005, under the patronage of HE Shaikh Mohammed Bin Rashid Al Maktoum, the Ruler of Dubai, she was awarded the Mohammad bin Rashid Award for Young Business Leaders for the ”Best Arab Start-up Business in the Arab World for the Year 2005”
• In February 2006, under the patronage of His Majesty King Abdullah II Bin Al Hussein of Jordan and Her Highness Princess Sabeekabint Ibrahim Al Khalifa, President of the Bahrain Supreme Council for Women; she was awarded “Investor of the Year Award in the Category of Young Innovative Entrepreneur for the Year 2006” during the MENA Ministerial Meeting held at the Dead Sea, Jordan.
• In March 2008, she was awarded “The GCC Young Entrepreneur Award for the Year 2008” at the Women in Business Conference held in Oman.
• In May 2008 during the World Economic Forum held at Sharm El Sheikh, Egypt, the President of the United States, during his official address, recognized Mrs. Huda as an “inspiring example for the whole region”.
• In 2008, She was named as one of the 50 Most Powerful Businesswomen in the Arab World by Forbes Magazine.
• In July 2008, was named the First “Leader Entrepreneur Award” by HE Dr. KandehYumkella, Director General of UNIDO during the UNIDO General Conference.
• In 2011 she was titled by UNIDO as an “Entrepreneurs Ambassador” for her active role in social entrepreneurship role through promoting women economic empowerment.
• In 2013, and as part of the G8 Summit held in UK she was awarded a “Certificate of Appreciation as a Woman of Achievement” by the G8 UK Presidency for the Deauville Partnership.

Mrs. Janahi, was invited by UNIOD as a speaker in the 5th Ministerial Conference of the Least Developed Countries in the Session “Converting commodities into products: the role of women in LDCs”; held in Lima, Peru from 30 November – 1 December 2013.
Most recently in May 2015; she was one of three Bahraini Women Entrepreneurs to receive the Indira Gandhi “Priyadarshani Award 2015"; for her contribution to women economic empowerment.

For UNIDO, the economic empowerment of women is key to building healthier, better educated, more peaceful and more prosperous societies, and the organization is working hard to ensure that women both help create, and benefit from, inclusive and sustainable industrial development.
Letting women participate more fully in economic life can yield enormous economic benefits but this is an area where the Middle East and North Africa (MENA) region as a whole lags behind. In the MENA region, the gap between men and women’s participation in the labour force over the past decade was almost triple the average gap in the emerging market and developing economies. If this gap had simply been double instead of triple, the gains for the entire region would have been enormous - almost US$1trn in output, amounting to annual gains of about 6 percent of GDP.

In the countries of the Gulf Cooperation Council, the regional intergovernmental union consisting of Bahrain, Kuwait, Oman, Qatar, Saudi Arabia and the United Arab Emirates, UNIDO is spearheading an array of initiatives to help economically empower women.

Back in 2001, Huda Janahi was one of the first women to benefit from the then recently launched Arab Regional Centre for Entrepreneurship and Investment Training (ARCEIT), established in Manama, the capital of Bahrain, as a South-South cooperation initiative of UNIDO, the Bahraini Government and India’s Inter-Regional Centre for Entrepreneurship and Investment Training. Since then, hundreds of other women have graduated from the ARCEIT Women's Entrepreneurship Development Programme, implemented in association with the Ministry of Industry, the Bahrain Development Bank and the Bahrain Businesswomen’s Society.
Since 2009, UNIDO’s Investment and Technology Promotion Office in Bahrain has been working with the national Supreme Council for Women to draft and implement the economic component of the Bahrain National Women’s Empowerment Strategy, which includes an Enterprise Development and Investment Promotion (EDIP) programme. The EDIP programme is a package approach that not only aims to develop the capacities of potential entrepreneurs and help them develop their own businesses, but also helps upgrade and expand existing enterprises.

In early 2011, ARCEIT, in cooperation with the Supreme Council for Women, launched a number of specialized entrepreneurship programmes based on the EDIP programme modality in various sectors, including media, fashion, photography, transport, translation, agribusiness and health and wellness.
ARCEIT has also established an Entrepreneurship Center at the Royal University for Women, the purpose-built university dedicated solely to educating women, located in Riffa, the second largest city in the Kingdom of Bahrain. The centre provides added value services to potential women entrepreneurs/students who aspire to start their own businesses. In the course of the development this centre, 20 professors at the Royal University for Women have been trained in the EDIP programme.

In Abu Dhabi, capital of the United Arab Emirates, UNIDO has established a women’s economic empowerment centre, in cooperation with the Family Development Foundation. The centre will raise awareness of entrepreneurship and its potential contributions to economic development; strengthen national technical and institutional capacity to run and sustain an EDIP programme; enhance potential women entrepreneurs’ capacity to conceive, develop and implement income-generating activities; and enhance the performance and growth of existing women-owned enterprises.

UNIDO has also provided support to the MENA Businesswomen's Network, which leverages the collective energy of businesswomen's organizations throughout the region to shape the role of women in business and leadership positions. In January 2015, during the International Entrepreneurs Investment Forum in Bahrain, UNIDO officially inaugurated the Arab-African Businesswomen’s Council, in cooperation with the Arab Bank for Economic Development in Africa and the Arab Businesswomen’s Council.
To help women-led small enterprises transition from the informal to the formal sector, UNIDO has supported the establishment of a ‘Bank of Innovation’ with branches in Bahrain, Egypt, Jordan, Lebanon, Sierra Leone, Sudan, Syria and Yemen. The bank aims to provide micro- financing schemes without collateral to potential entrepreneurs to help them boost their businesses.

Thanks to these and other UNIDO initiatives, women of the Gulf, and beyond, who choose the challenging but potentially rewarding path of entrepreneurship, are better placed to succeed.

“Entrepreneurs (should) reach out and share their ideas and problems with other established international entrepreneurs, as well as seek support from establishments such as UNIDO.”